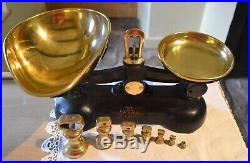 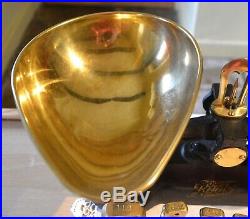 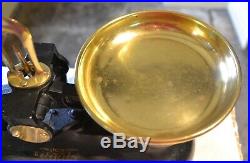 These BLACK kitchen balance scales were made by BOOTS THE CHEMIST Ltd ENGLAND. CHEMIST is a word used in the UK for PHARMACY in the US. His business soon proved popular, especially with the working poor of Nottingham's new industries, who could not afford the services of a doctor. After John's death in 1860, his son, Jesse took sole control and his talent for business was soon evident. He expanded the range of products to include proprietary medicines and household necessities. In 1884, Jesse's first shops opened outside the city, in Lincoln and Sheffield. Jesse's policy of superior goods at competitive prices delivered with expert care, meant that the Boots name quickly became synonymous with quality, value and service. History does not record when the company started to manufacture kitchen scales.

These were definitely made in the earlier years of production evidenced by the label. These models are very hard to find these days. Should they ever get out of balance, rather unlikely, there is a small box of ball bearings on the underside of the small pan which is accessed by a screw on the top.

The BOOTS CASH CHEMIST label is damaged which is the norm. It is a source of wonder to me that they made scales out of virtually indestructible cast. Iron then applied a label that would wash off. They have been used but there are only a very few virtually undetectable wear marks to the paintwork. There is some reflection in the photos. The red hue is my jumper and the black lines in the pan are our ceiling beams!

Discolouration in the brass bowls. Brass is soft and when potentially corrosive stuff, like salt, is placed in the bowl and not wiped clean a reaction happens and the surface of the brass is affected. Sometimes it can be almost all removed but it rather depends on how long the stuff was left in there. Almost every bowl I come across has some similar marks. They are a nice size, 12 wide and 8 high, not taking up too much room on your worktop.

The brass bell weights comprise.... You may be concerned that they have to be sent such a long way but I can assure you there is no need. I use large sturdy boxes and pack all the spaces so they remain rigid.

The item "VINTAGE ENGLISH KITCHEN SCALES BLACK BOOTS CASH CHEMISTS 7 BRASS BELL WEIGHTS" is in sale since Saturday, March 16, 2019. This item is in the category "Antiques\Mercantile, Trades & Factories\Scales". The seller is "stuffbyiris" and is located in Alston. This item can be shipped worldwide.