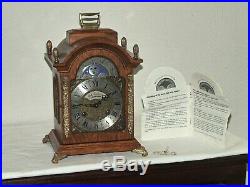 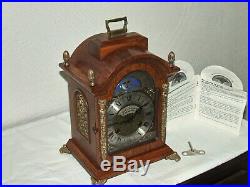 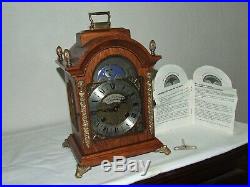 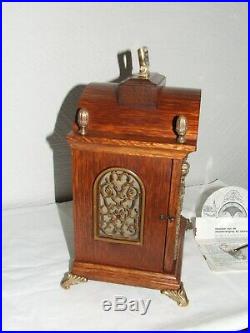 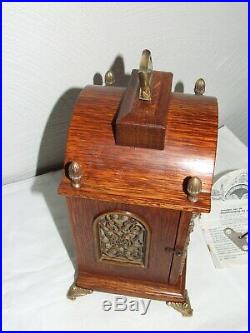 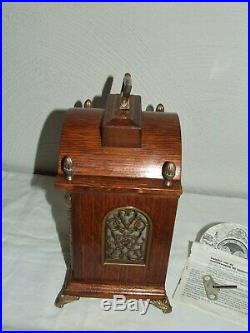 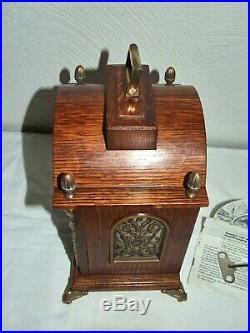 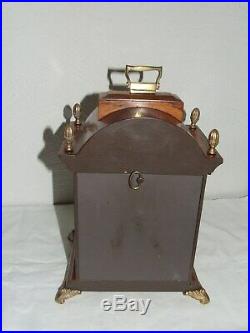 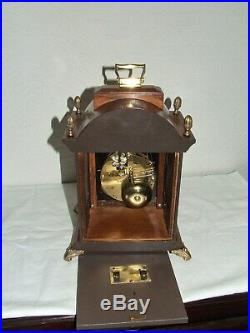 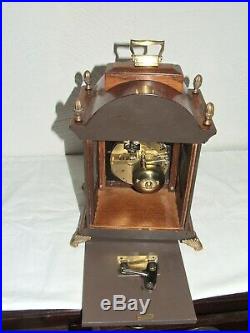 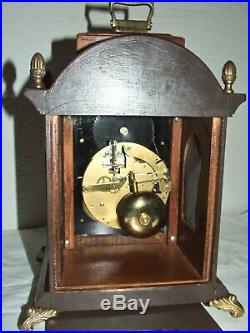 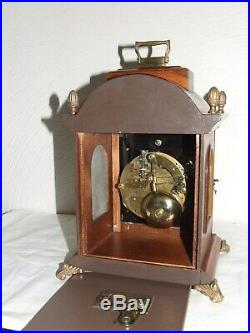 This Is A Original Vintage Dutch Oak Wood 8 Day Bracket Clock With Rolling Moonphase. This clock has a beautiful oak case with fretwork side panels. All decoration on this clock is brass from feet to handle. Clock dates to the 1960 - 1970s. Included Adjusting of the moon disk instruction.

The Dial is signed Joh. This clock strikes on two bells the full hour for how many hours it is and once on the half hour. The sound of the bells are beatiful and clear. The clock is in used full fine running condition. Size about 30x20x16 cm 11.8x7.9x6.3 inches included the ornaments. The movement is running fine, numbered Franz Hermle 130 - 070, with a good working rolling moon phase/calendar and the case is in excellent condition for his age. The Clock comes with key. The Hermle clock company, like many of the well-known American clock companies , such as Seth Thomas and Ingraham , owes its existence to one clockmaker who had the desire to build quality clocks, Franz Hermle. While the major American clock companies trace their roots to the early 1800s, the Hermle company is a twentieth century success story. The company was started in 1922, shortly after. Began recovering from World War I, as the Franz Hermle Clock Company in the town of. Amazingly, at a time when the world economy was plummeting into the Great Depression and American clock companies were struggling to avoid bankruptcy, the new German company prospered. By the early 1930s, the Hermle clock company was a world leader in the manufacture of quality clock movements. While other clock companies were using nineteenth century methods, Franz Hermle had an eye for efficiency and used the latest modern techniques for producing clock movements. Like other master clockmakers, Franz Hermle passed on his clockmaking expertise to his four sons: Gebhard, Alfred, Hans and Heinrich, changing the name of the company to Franz Hermle and Sohn. Continuing the success story, Franz Hermle and his sons prospered after the devastation of. From World War II, at a time when many of the major American companies could not recapture their former status as world leaders in clockmaking and were soon to disappear from the scene. In addition to the manufacture of clock movements, Franz Hermle and Sohn expanded into the manufacture of clocks and clock accessories.

Franz Hermle died in 1953, leaving the company to his sons. At the current time, Franz Hermle and Sohn remains in the hands of the third generation of Hermle clockmakers. The company continues to specialize in mechanical and quartz movements and other clock parts that are manufactured in a computerized and automated precision manufacturing environment.

The manufacturing is done in four locations in. Plus an American subsidiary called Hermle Black Forest Clocks. This American facility is located in Amherst, Virginia. Franz Hermle and Sohn is a major worldwide supplier of clock movements, exporting to over 100 countries. Their advertising points out the fact that You may not recognize our name, but we are the source who keeps the clock industry ticking.

The company manufactures clock movements that are used in clocks worldwide producing, according to their claim, the largest selection of mechanical and quartz movements available anywhere. The company also produces a line of grandfather clocks under the title of floor clocks. The clock cases are wooden with designs that range from elaborate to modern unembellished styles. There are approximately 20 models of floor clocks to choose from and all are made in.

This Original Dutch Clock is in used Condition and Therefore Not New. The item "Dutch Bracket Mantel Shelf Oak Clock, FHS movement, Moonphase, 2 Bells" is in sale since Thursday, May 23, 2019.

This item is in the category "Antiques\Antique Clocks\Mantel/Carriage Clocks\Post-1900". The seller is "gerrit6125" and is located in Brummen.